“At first, I did what most people do when they don’t want to face up to a problem. Nothing.”

Richard Brown is living someone else’s life. At least, that’s how it feels. On the surface he has it all. A wife, two kids, a house, a job. Even two pushy in-laws. But more and more Richard finds himself escaping to the bath, the one place he can be alone. Somewhere along the way, his choices stopped being his.

Every time Richard sees his neighbor, Bill standing in his window, he sees a man without obligation. Without responsibility. He starts to think maybe this isn’t the life he wants. Maybe he never wanted it. Panic, dread, unhappiness creeps in until he decides he has to do something. But other people’s lives aren’t always what the seem.

“And I know that time is ticking by. Time I will never have again. As I stare down the length of the table, I am acutely aware of each passing second.”

The very first thing that grabbed my attention is how spot on Lee captures life with small children. Kids are noisy. Exuberant. Little balls of non-stop energy. On their best days, and with no fault of their own, they can be overwhelming and tiring. Lee captures this dynamic with a humor that only a parent could. But this isn’t a humorous book, and while there is a lightness to the observations with his children, there is also a dark melancholy as the burdens of his life weigh him down.

Capturing what living with depression is like can often be tricky. It can manifest in so many ways, with unique experiences and occurrences for each person. Parenthood is full of love. But, it can also be stressful. A time when, for any number of reasons, the sheer density of obligations can feel overwhelming for a parent. Small things can feel insurmountable. Big things can feel impossible.

“And I am surer than ever that this isn’t what I signed up for. Nobody told me this was how it would be.”

Lee writes this internal struggle so eloquently, it’s both heartbreaking and relatable. Life as an adult can be hard. Sometimes marriages fall into a state of complacency so deep that you wake up to a stranger. Small chores left undone around the house can feel like failures of epic magnitude. Just wanting peace in a house filled with other people, even people you love, can feel suffocating.

There’s a lot of evidence than often we can trigger depression and anxiety from placing our values on external sources around us. We see the life our neighbor lives and find fault in our own. Lee does an excellent job showing how easy it can be to fall into this trap. There is a danger in wishing we had someone else’s life without fully understanding the burdens they bear.

I think that we all feel the way Richard does at various stages in our lives. It’s easy to look at the life we live and find the flaws. It’s easy to become irritated with people who surround us the most, reminding us of the things we like least about ourselves. What parent hasn’t dreamed about being on a beach instead of picking up toys, or folding another load of laundry, or listening to the thousandth meltdown of the day? It happens.

“My time is filled with noise, work, children, confrontation, argument and disappointment. The times that life reflects the quiet solitude I desire are so fleeting that they are not even worth considering.”

Whether you agree with Richard or not, it’s easy to sympathize with him. The stress of being trapped in a house with small children and your in-laws is the stuff of horror films for many people. These moments that make up his life will cause you to chuckle and shake your head at his plight, in equal measure.

Drift Stumble Fall is told over the course of a snow storm. It’s well paced and moves along at a steady rate. This is a character novel, where the focus of their experience is the driving force to the plot. Lee does a fantastic job bringing Richard and his family to life. It’s easy to fall into the novel, being swept along until the heartbreaking end. By the time you close the last pages, you’ll feel as if you were a part of the family.

Lee does a superb job in bringing mental health into focus. Drift Stumble Fall is a novel that allows us to discuss the small ways we can fall into a wormhole of unhappiness. These characters paint vivid, real life experiences that I think most people will relate to at least once. How we can love people while they drive us batty. What to do when we feel overwhelmed and suffocated. And most importantly, to recognize why these conversations are important.

Thank you Hideaway Fall for including me in the blog tour and sending me a review copy!

Be sure to head over to GOODREADS for more reviews, and links to all your favorite retailers.

Did someone say GIVEAWAY???

Head over to my Instagram @jenabrownwrites  later today for details!!! 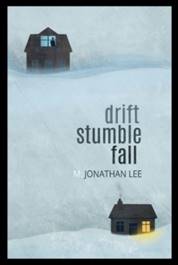 Richard feels trapped in his hectic life of commitment and responsibility.  From the daily mayhem of having young children, an exhausted wife and pushy in-laws who frequently outstay their welcome, Richard’s existence fills him with panic and resentment. The only place he can escape the dark cloud descending upon him is the bathroom, where he hides for hours on end, door locked, wondering how on earth he can escape.

Often staring out of his window, Richard enviously observes the tranquil life of Bill, his neighbour living in the bungalow across the road.  From the outside, Bill’s world appears filled with comfort and peace.  Yet underneath the apparent domestic bliss of both lives are lies, secrets, imperfections, sadness and suffering far greater than either could have imagined.  Beneath the surface, a family tragedy has left Bill frozen in time and unable to move on.  As he waits for a daughter who may never return, Bill watches Richard’s bustling family life and yearns for the joy it brings.  As the two men watch each other from afar, it soon becomes apparent that other people’s lives are not always what they seem.

This darkly humorous novel is an insightful commentary on the
fragility of family life, and a modern fascination with
the grass always being greener on the other side.

The author of five novels, M Jonathan Lee is a tireless mental health awareness campaigner, working closely with organisations including Mind, Time to Change and Rethink and blogs regularly for Huffington Post. Having personally experienced anxiety and depression during his life, Jonathan draws on his experiences to inform his writing.

M Jonathan Lee is a Yorkshire-based author and mental health awareness campaigner. He began writing seriously in 2006, shortly after the suicide of his brother, Simon, and his own struggle with anxiety and depression.  It took nearly five years for Jonathan to write his first novel, The Radio – a black- comedy which deals with suicide which was shortlisted for the Novel Prize 2012 (for unpublished authors) and subsequently published in 2013.

Jonathan campaigns tirelessly to remove the stigma associated with mental health problems and works closely with various mental health charities includingMind, Time to Change and Rethink, frequently blogs for the Huffington Post and is a regular guest on BBC Radio Sheffield talking about mental health. He regularly speaks in local schools and colleges on writing and mental health and is currently spearheading a local outreach project in which local churches provide assistance to those affected by anxiety and depression. Before writing full-time, Jonathan held a senior position in a FTSE100 company.  He lives in Barnsley, Yorkshire, with his second wife, five children, two cats and a dog. @MJonathanLee

‘An unusual and moving novel that will keep you thinking about it for days afterwards.’ – Culture Fly

‘A beautifully-written piece that sticks with the reader well beyond the last page. Not to be missed.’ – Reader Dad

‘It is moving. It is brave!’ – Northern Crime Review

‘A gorgeous book about grief and guilt that will stay with me for a long time.’ – Bloomin’ Brilliant Books

‘I had every intention of just reading a couple of chapters, but before I knew it I had devoured the book in one sitting.’ – All About The Book Blog

Hideaway Fall is a new independent publishing house based in Yorkshire, aiming to support local and Northern based authors who write kooky, unique and astonishing fiction.@HideawayFall www.hideawayfall.com 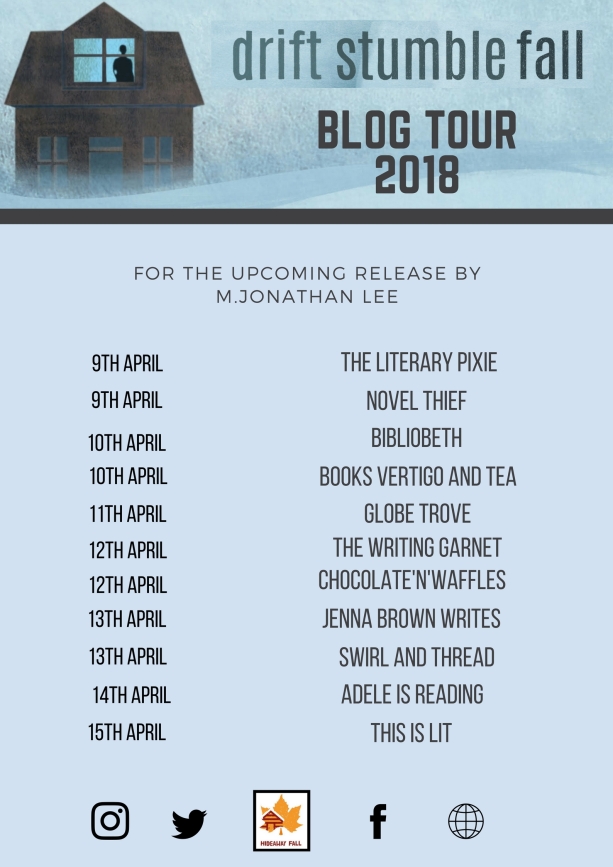