“It showed that people could convince themselves of things that, in a sober moment, they would recognize were not true.”

Pride and Prometheus is the delightful combination of two beloved classics: Jane Austin’s Pride & Prejudice with Mary Shelley’s Frankenstein. While it may seem difficult to imagine how the two stories could merge, John Kessel makes the marriage between the two merge seamlessly. The transition happens so easily that it isn’t difficult to imagine this is the natural progression in both stories.

We pick up ten years after Pride & Prejudice ends, with the two youngest sisters, Mary and Kitty Bennett, still unmarried. Victor Frankenstein, still running from the creature he created and his, as yet, unfulfilled promise to create a Bride, runs into the sisters at a party in London. Having fled Europe under the false belief that the creature couldn’t follow him.

There’s something delightful in the way both of these classic stories focus on marriage, the expectations of society, and the nature of love. Which makes their merging all the more natural. The Creature wants only companionship and longs for a mate, much in the way the Bennett sisters do. Once you start to see these themes emerge, it becomes obvious how these novels fit together.

Kessel nails the language and feel from both of the novels. He pulls from them to weave little details into the narration, which made Pride and Prometheus quite an authentic and enriching experience. I was thrilled to see Mr. Bennett once again, and loved that the characterization of how he would age stayed true to the Mr. Bennett we all know and love. Of course, we also see Mr. Darcy and Lizzie, though they aren’t featured very prominently in this story. However, even though their inclusion was brief, the essence of their character was held true.

“Two weeks later Darcy arrived to once again save Mary from herself. He had become accustomed to this role with regard to his wife’s sisters over the years, and though he was weary of it, he did not reprove Mary any more than she did herself.”

For anyone worried, this novel somehow blends the gothic horror of Frankenstein perfectly with the regency romance of Pride & Prejudice. The themes of companionship, love, the search for the truth of who we are are in both the original novels and work to create this new extension of the stories. The heart of the characters are maintained while giving them a plot line we wouldn’t have imagined.

Two hundred years later, and these books are once again given new life. As I was reading I found myself wanting to revisit them, to read them and imagine this new future for the characters. Seriously, how fun is it to imagine the gentlemanly duty that Darcy would embody while cleaning up the messes of the Bennett girls?! It reminds us that while Lizzie may have gotten her happily ever after, her sisters and family wouldn’t just disappear from her life.

In the same aspect, we see the future that Victor set his path on. Running, hiding, trying to deny the horror he feels of the consequences of creating life. And seeing how the Creature himself has evolved. They are still grappling with the questions we were left with: what does it mean to be human?

What really makes these two stories blend so well, is the focus of society. Women in Austin’s world had to focus on what society thought of them. They couldn’t be unchaperoned, or behave in ways that could tarnish their reputations without fear of repercussions. In the same way, the Creature shows us that darker side of humanity. How people can judge, and react, sometimes violently. In many ways the Bennett sisters and the Creature share the same plight, the same frustrations, and the same journey.

“For the Creature was right: she had no power to change what the world would think and do. But that was the nature of love: one did not offer it with any assurance that it would change the world, even if in the end it was the only thing that could.”

I realize I am not really giving much in the way of plot. That’s on purpose. This novel is a journey that should be taken a bit by surprise. Part of the joy is in discovering how these characters come to be introduced and then intertwined. It’s a novel full of surprising twists, each one encapsulating the heart and soul of Shelley and Austin.

If you enjoy taking classic novels and adding quirky twists to them, this novel is seriously screaming your name. It’s been a while since I’ve read either novel, but I was quickly drawn in and reminded of both stories. I wanted to reread them, imagining the future that lies in store for them. Kessel creates a new book, but he does so by paying proper respect and homage to these classic works. I absolutely loved this book and highly recommend it!

Thank you Wunderkind PR for sending me a review copy! 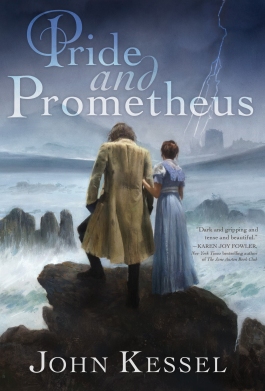 Pride and Prejudice meets Frankenstein as Mary Bennet falls for the enigmatic Victor Frankenstein and befriends his monstrous Creature in this clever fusion of two popular classics.Threatened with destruction unless he fashions a wife for his Creature, Victor Frankenstein travels to England where he meets Mary and Kitty Bennet, the remaining unmarried sisters of the Bennet family from Pride and Prejudice. As Mary and Victor become increasingly attracted to each other, the Creature looks on impatiently, waiting for his bride. But where will Victor find a female body from which to create the monster’s mate?Meanwhile, the awkward Mary hopes that Victor will save her from approaching spinsterhood while wondering what dark secret he is keeping from her.Pride and Prometheus fuses the gothic horror of Mary Shelley with the Regency romance of Jane Austen in an exciting novel that combines two age-old stories in a fresh and startling way.

For Sale Now! Get it at your favorite retailer using the links below:

Born in Buffalo, New York, John Kessel’s most recent book is the new novel Pride and Prometheus.  He is the author of the earlier novels The Moon and the Other, Good News from Outer Space and Corrupting Dr. Nice and in collaboration with James Patrick Kelly, Freedom Beach. His short story collections are Meeting in Infinity (a New York Times Notable Book), The Pure Product, and The Baum Plan for Financial Independence. Kessel’s stories have twice received the Nebula Award given by the Science Fiction and Fantasy Writers of America, in addition to the Theodore Sturgeon Memorial Award, the Locus Poll, and the James Tiptree Jr. Award. His play “Faustfeathers’” won the Paul Green Playwright’s Prize, and his story “A Clean Escape” was adapted as an episode of the ABC TV series Masters of Science Fiction. In 2009 his story “Pride and Prometheus” received both the Nebula Award and the Shirley Jackson Award. With Jim Kelly, he has edited five anthologies of stories re-visioning contemporary short sf, most recently Digital Rapture: The Singularity Anthology. Kessel holds a B.A. in Physics and English and a Ph.D. in American Literature. He helped found and served as the first director of the MFA program in creative writing at North Carolina State University, where he has taught since 1982. He and his wife, the novelist Therese Anne Fowler, live and work in Raleigh, NC.