Hey hey and happy Monday! Okay, you’re right, no one loves Monday’s. Not even Monday. But, that just makes it a perfect day to bring some stabby fun to the party!

Every Monday, or most Monday’s anyway, I’m going to play this game with some of my favorite and not so favorite books. Don’t worry, I won’t be boring and always kill off the villains. That’s just too predictable… not to mention, I usually like the villains. So get ready for lots of evil making out! It’s Monday, we need some distraction, right?!

This week, we’re going to start with two of my all time favorites: Red Rising and Six of Crows! For the third book, I chose Everless because it was one of the first (and best) reads of this year so far! 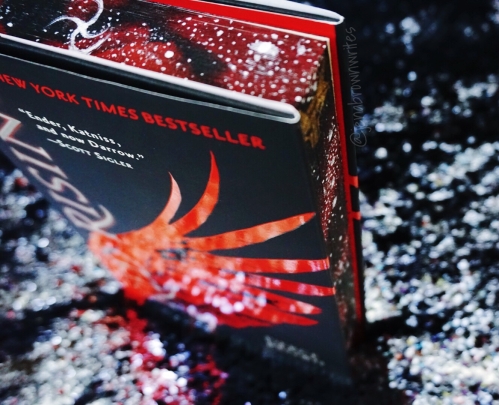 You guys knew I had to pick this book first, right?!

Make out: After careful consideration, I’m going with Tactus. I mean, he’s got some issues, but he’s always up for a good time.

Marry: I feel like this is obvious. Mustang. I mean, we all marry Mustang right?!

Murder: I’m so about murdering Cassius. How much misery could be avoided if we just murdered him?!

Six dangerous outcasts. But we can only choose three…

Make Out: I feel like the obvious choice for this is Nina. She is just wild enough to be up for a good make out session. And then waffles.

Marry: 100% Inej. Who wouldn’t want to marry a ninja assassin?! Everyone. That’s who.

Kill: Even though I’ll have to do this after I make out with Nina, I’m murdering Matthias. I mean, I’m sorry, but also he’s totally dead.

And finally, the magical Everless…

Make Out: I’m choosing the dark and mysterious Liam for this romp.

Marry: Apparently I have a thing for strong female characters because it’s Jules for the win!

Murder: While I’m sure Roan would be fun to make out with, alas someone must die. Besides, he’s just too pretty and flirty to survive.

And now….. To play with the books themselves…..

Totally making out with Six Of Crows.

We all knew I was marrying Red Rising.

Which makes me so sad, but that means I have to murder Everless.

I have to say, that was a ton of fun! I look forward to next week’s edition. In the meantime, tell me, who would you make out, marry or murder in these books???