Traitors lurk around every bend. Mishi’s mind is betraying her, and she fears her kisō and katana will betray her next. Taka’s heart abandons her for a person she cannot possibly trust. Now that the two friends are obliged to help re-establish peace in the land of Gensokai, the only question is where the next betrayal will come from and if Mishi and Taka will have the strength to survive it.

I was thrilled to be able to dive right into Traitor’s Hope after finishing Blade’s Edge earlier this week! You can find my review HERE. A huge thank you to Rockstar Book Tours for hosting this tour and including me as a tour stop! Click the picture above to find more tours and be sure to check out all the blog stops on this tour, by clicking the links below!

First, I loved the first book. LOVED! The world building! The characters! The magic! I loved it all! I even loved the darkness that the world presented. Traitor’s Hope kept the same pacing and tone from Blade’s Edge and leveled up!

We still get narration from Taka and Mishi, both grown and traumatized in their own ways from the war fought. Instead of hearing from Tsuko this time, we get the perspective of Kusuko instead.

Assassin turned ally, Kusoko was one of the most interesting characters in the book. Her story of how she came to be a hishi assassin highlights the cruelty and brutality of the crumbled regime. But we get so much more than a heartbreaking story from Kusoko. We get an interesting look at the psychology of lifelong abuse and brainwashing. The depth we get from her is quite astounding, and made her not just an integral part of the story, but really brought to life what the New Council was fighting against.

The themes in this book are no less severe than in Blade’s Edge. We are still in the aftermath of war, with factions attempting to start a new one. The island of Gensokai is no less violent than before, and it still holds on to it’s negative views on anyone other than male Kisoshi. The war may be over, but the old regime is not going to be easily reformed.

“The illusion of power can make men blind to many things.”

And there is a lot to love in this sequel! First, I adore that even though this is the second in a series, and the story is obviously building on the first book, the story isn’t reliant on the first book. You could easily read this on its own, and while the experience won’t be quite as deep or rich, it would be enjoyable still. The second thing is that we get a glimpse of what a society looks like after a war. Often in a series, we get the ending of the series at the end of the conflict. So we don’t get to explore what the next steps in that rebuilding of society looks like. Here we do, and folks, it isn’t as easy as we would hope.

“I hadn’t considered that there would be men evil enough to keep harming innocents even once they knew the truth of their own actions.”

As the society is dismantled and rebuilt, we also get more information about the elemental magic kiso. Learning more about how the elements work, and even how they can combine both within an individual and with Kisoshi working together was fantasy at it’s best! I wish we could have gotten a bit more with my favorite Dragon and Tree Kami, but I get it, rebuilding a society isn’t about training, so we didn’t see quite as much of them.

And talk about plots! Plots with plots, schemes within schemes! The brilliance of the title is that you go in suspecting someone of being treacherous. What you don’t expect is how many people that could possibly be! I gave up trying to figure out who was going to betray who, because the double crosses on the double crosses became impossible to guess. I really liked that each character presented, both old and new, were as vividly complex as before. And this complexity made predicting treachery nearly impossible. But it isn’t simply treachery between characters. McClain shows us the danger in betraying our true selves.

In keeping with the first book and taking an unflinching look at tough themes, this book dives deep into exploring PTSD. The emotional wreckage that violence leaves is real. And even if you’ve been training for war, the reality of it is often very traumatic. I loved that McClain really let us see how deep these wounds can be in a character. How patience and time and understanding can help heal those wounds.

“She was very afraid of what lay beneath the visions that haunted her dreams, both waking and sleeping.”

Finally, we get to see a budding same sex romance. It’s fantastic to see an author seamlessly introduce the budding sexuality of her characters and include diversity in that development. The romances are slow, and sweet, written more from the emotional development rather than focusing on the physical. That was refreshing and added to the emotional growth of each character.

This is a world I am deeply in love with. I love the characters, and want to know what happens next. I love how McClain isn’t afraid to explore some really intense topics, and she does them justice. Whether it’s revisiting old characters, or getting to know new ones, the dialogue and personalities are such  joy to read! This is a series that I will be continuing as long as she writes them!

Thank you Rockstar Book Tours for the opportunity to participate on this tour; as well as the chance to read and review these books! They are phenomenal! 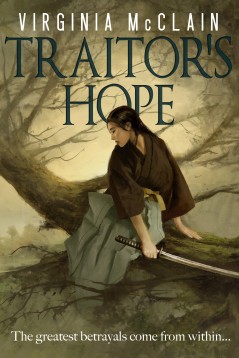 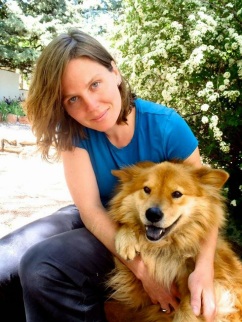 Virginia thinks dangling from the tops of hundred foot cliffs is a good time. She also enjoys hauling a fifty pound backpack all over the Grand Canyon and sleeping under the stars. Sometimes she likes running for miles through the desert, mountains, or wooded flatlands, and she always loves getting lost in new places where she may or may not speak the language.

She recently moved to Winnipeg with her husband (a Manitoba native) and their dog.

1 winner will receive a signed paperback set of BLADE’S EDGE & TRAITOR’S HOPE, US Only.

Be sure to follow the rest of the blog tour, and visit the previous stops too!