I am very excited to be a part of this tour to celebrate the release of this gorgeous paperback! Thank you Rockstar Book Tours! Be sure to click the link above to check out all of their ROCKING books and don’t miss the rest of the fabulous blogs on this tour (links below)!

“The woods were insane in the dark, terrifying and magical at the same time. But best of all were the stars, which trumpeted their light into the misty dark.”

Castella Cresswell and her five siblings-Hannan, Caspar, Mortimer, Delvive, and Jerusalem- know what it’s like to be different. For years, their world has been confined to their ramshackle family home deep in the woods of upstate New York. They abide by the strict rule of God, whose messages come directly from their father.

Slowly, Castley and her siblings start to test the boundaries of the laws that bind them. But, at school, they’re still the freaks they’ve always been to the outside world. Marked by their plain clothing. Unexplained bruising. Utter isolation from their classmates. That is, until Castley is forced to partner with the totally irritating, totally normal George Gray, who offers her a glimpse of a life filled with freedom and choice.

Castley’s world rapidly expands beyond the woods she knows so well and the beliefs she once thought were the only truths. There is a future waiting for her if she can escape her father’s grasp, but Castley refuses to leave her siblings behind. Just as she begins to form a plan, her father makes a chilling announcement: the Cresswells will soon return to their home in heaven. With time running out on all of their lives, Castley must expose the depth of her father’s lies. The forest has buried the truth in darkness for far too long. Castley might be their last hope for salvation.

Readers should know going in that there are some issues that could be uncomfortable for them. This is a book about extreme religious beliefs, bordering on cult-like behavior. I honestly don’t know the rules to define a cult, so while this family doesn’t recruit new members, they have some fairly insane beliefs. There are incest issues, although nothing graphic, the idea of siblings being paired to be married in the afterlife may creep some readers out. And there is lots of physical abuse. Again, it isn’t graphic, but it isn’t pleasant either.

That said, the intensity of this book is necessary and forms a very well rounded story. Growing up with Castley’s father wouldn’t be a walk in the park. And you won’t have stable, rational children. The representation of the fear combined with the doubt in each of the Cresswell children felt very accurate. It is the fear that keeps them in line, even when they want to push back. Fear coupled with doubt is any abusers greatest weapons. And Wass writes this internal and external war vividly. It is physical warfare, yes, but it is also a twisted psychological war as well.

In the beginning, it is Mortimer who is the rebellious one. Always pushing, always causing trouble. Castley is only starting to wonder if the things she is told are true. She is only beginning to test her own boundaries. These small rebellions felt normal. What teenager didn’t push boundaries with their parents? The difference is the fear of the consequences. Their consequences were much harsher and potentially more dangerous.

“She looked like my soul, battered and twisted, afraid to move. And I felt terror grip me, in tight hot fingers around my throat.”

Castley is fantastic! I adored her. Her growth throughout this novel felt so real to me. And she was very relatable. She makes some incredibly insightful observations about people and human nature. It is this sharpness that makes her strong. It also makes it understandable that Castley would be the one who sees through the litany of lies and veiled threats her and her siblings have been indoctrinated with for their entire lives.

“One person tells a story about themselves and then the other person does the same thing, and neither of them realizes they’re not even talking to each other. They’re just talking to themselves out loud.”

The suspense was brilliantly written. By the end, I was clutching my dogs and climbing the walls, nearly breathless, as I honestly had no idea which direction Wass would take the ending. It could have gone in so many directions, it was difficult to even try and predict how it would all play out. I would have liked a little more detail, as some plot points were vague, but maybe that’s just because I was really emotionally invested by the end. I wanted to know every minor detail.

If you’re looking for creepy YA suspense, look no further! This book is full of cultish creepiness, adolescent angst and some serious terror for good measure. I will for sure be placing her next book on my wishlist and waiting for it’s release!

Once again, thank you Rockstar Book Tours for including me on this tour! I had a blast! Keep scrolling for links to the book, the author and a chance to WIN a copy of this awesomely creepy novel!!! 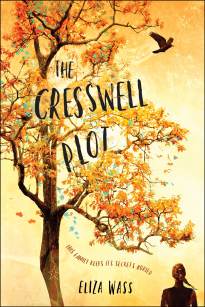 Eliza Wass is an author, journalist and the wife of the late musician Alan Wass. Her debut novel, The Cresswell Plot, was published in 2016 to critical acclaim by Disney-Hyperion. She has contributed articles to The Guardian, Grazia, NME, Shortlist and THE FALL.

​Her second book with Disney-Hyperion, The Life and Death Parade, will be published in June 2018.

3 winners will receive a finished copy of THE CRESSWELL PLOT Paperback, US Only. Click the photo below to enter!

Please be sure to check out the rest of the lovely blogs on this tour!

One thought on “The Cresswell Plot – Review + Giveaway”